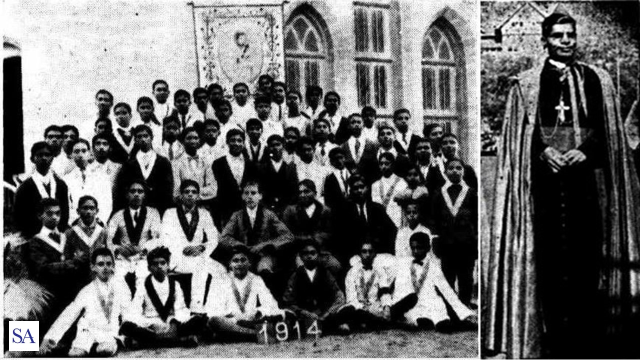 A group photo from St Patrick’s School in 1914. The child sitting in the front row second from left was born on 23rd October 1900 in Karachi. Six years prior to this picture, he had lost his father and was being brought up by his mother. This brilliant ecclesiastic had a number of ‘firsts’ to his credit. He was the first Indian to be appointed Bishop Auxiliary of Bombay, the first to be made Archbishop and the first to be created Cardinal. Many years later, he returned to make his first visit to Karachi in October 1953. High government officials and members of the diplomatic corps joined Catholics at Karachi in giving a warm welcome to the first native of Karachi to become a Cardinal. It was the first visit of His Eminence Valerian Cardinal Gracias, Archbishop of Bombay, to his birthplace since he received the Cardinal’s hat earlier that year. On hand to welcome the Cardinal were Abdur Rashid, acting Governor-General of Pakistan, Archbishop Alcuin van Miltenburg, O.F.M., of Karachi, and the Indian High Commissioner. The Governor General gave a luncheon in the Cardinal’s honour.

Graduate of Dow Medical College Class of 1977.
View all posts by Amin H. Karim MD →
This entry was posted in Contributions by Christians. Bookmark the permalink.