The Lost Tribe of Karachi

JEWS: THE LOST TRIBE OF KARACHI
By

Pakistan was not inherently anti-Semitic. In fact, Pakistan hosted small Jewish communities from the 19th century until the end of the 1960s and the largest of that community lived in Karachi. They were of various origins. Most of their ancestors had migrated to Karachi from Persia and the native language for this group, known as Bene Israel, was Judeo-Marathi. In the 19th century, Bene Israel migrated from the western part of Maharashtra to nearby cities, chiefly Bombay, but also Poona, Ahmadabad and Karachi. About a century ago, the Iranian Jews exported carpets to central Asia. The Soviet Union closed its borders to them in the 1920’s and that is when a number of them moved their base of operation to Karachi. Working as commission agents, they brought carpets from Iran for further transportation to merchants in London. Jewish families in Karachi lived mainly in the areas of Ranchore Line, Ramswamy and Soldier Bazar. There used to be a kosher slaughterhouse as well. They spoke Urdu language in dealing with local people. Relations between the Jewish community and others in Karachi were harmonious till 1948. The history of Jews living in Karachi is neither preserved nor remembered in Karachi today.

In 1881, there were 153 Jews residing in Sindh. According to Aitken’s Gazetteer of the Province of Sindh, there were 428 Jews in the census of 1901and those nearly all were in Karachi. Many of them belonged to Bene Israel who observed Sephardic Jewish rites and were believed to have settled in India shortly after the destruction of Jerusalem by Titus. Their number rose to 650 in 1919.

During the British era, they were a small but vibrant community of Karachi. Young Man’s Jewish Association was founded in 1903 and Karachi Jewish Syndicate was established in 1918. The All India Israelite League, which represented 650 Bene Israel living in the province of Sindh was first convened – founded by two prominent Bene Israel, Jacob Bapuji Israel and David S Erulkar. Karachi became a fulcrum for the Bene Israel in India, the place where they congregated for High Holiday prayers. In addition, the Karachi Bene Israel Relief Fund was established to support poor Jews in Karachi.

Records of Jewish presence are found in various historic documents of Colonial rule. For example, J.W. Smyth records in “Gazetteer of the province of Sindh, Karachi district,” about education schools in Karachi:
”The number on the rolls in the English branch in March 1916 was 350, nearly all being Mahomedans, though some Hindus and a few Jews are admitted… St Patrick’s school was started in 1861 by the Reverend J. Wily, Roman Catholic chaplain, as a mixed school for boys and girls, and was conducted in his own quarters… A few Hindus, Mussalmans, Parsis and Jews attend…
The origin of the Church Mission High School was a private school started by Major Preedy, collector of Karachi, long before government moved in the matter of education. The number on the roll in March 1916 was 417, of whom 256 were Hindus, 77 Brahmins, 32 Jains, 35 Mussalmans, nine native Christians, two Parsis and six Jews… The number of students in the arts branch [of the Dayaram Jethmal Sind College] in 1915-16 was 268, of whom 181 were Hindus, nine Brahmins, 38 Mahomedans, 19 Parsis, 18 Europeans and Eurasians and two Jews.”

In the late 19th century, one of Karachi’s notables was Soloman David, who died in March 1902. He was a surveyor of the Karachi municipality and built the Magain Shalom synagogue in Karachi. His gravestone reads: “The widely known and highly respected Soloman David always sought the welfare of the Jewish community and through his liberality erected at his own expense a handsome synagogue, Magain Shalome”.

Prominent among the Jews during the Raj were Simon Wyse who ran the Great Western Hotel and Marder who owned Killarney Hotel Marder’s Palace. Thus, two of the best hotels of the city were owned and managed by the Jews. Moses Somake was the architect who gave the city some of the beautiful buildings such as Mules Mansion in Keamari, BVS Parsi High School, the Karachi Goan Association Hall in Saddar the Flagstaff House, Jaffer Faddoo Dispensary and Edward House. Abraham Reuben, a municipality surveyor who was elected to the post of councillor of the Karachi City Corporation in 1919 and twice thereafter. Abraham Robin was another well known person.

There were schools established by Jews. One of those was established in 1927 by Abraham Reuben in Haji Mureed Goth. Someone told me it still is running in his name ‘Abraham Reuben School’. If you look in the middle of the Mereweather Tower, Star of David can be seen engraved on it, set in stone.

The number of Jews increased between 1837 and 1941 with immigration (22%) as well in addition to natural increase. According to a 1941 consensus there were 22480 Jews in India. Of those 1235 were in the areas of current Pakistan. Jews in Karachi amounted to 0.3% of the population. Bene Israel were about 75% (the other main groups among Jews were Cochin and Baghdadi) and most spoke Marathi.

Also, during World War II there were some Polish Jews who came and stayed in Karachi. There was a transit group of children as well. Albeit a very small number.

A vibrant community, initially most of them were recruited as soldiers to the army of East India Company, but later moved to government civilian jobs and businesses. Even the womenfolk contibuted – in 1947 there were 538 Bene Israel women in Karachi of whom 30% were gainfully employed. Their literacy rate ran to 70.43%.

Just before the independence (in 1947), an estimated 2000 – 2500 Jews resided in Karachi; 200 of them decided to migrate to India on the division of the subcontinent and most of the remaining went that way in 1948. There were subsequent immigrations to Europe and Israel. By 1953 only about 500 Jews left in Pakistan. Most Bene Israel chose to go to India whereas the Baghdadi Jews preferred to go to Israel. Another account describes the number of 400 Jewish people living in Karachi in 1959. By 1968, their number in Pakistan had decreased to 250, almost all of whom were concentrated in Karachi, where there was one synagogue, a welfare organization, and a recreational organization. There were only 10 – 13 families left by 1972. The Jewish wife of an Australian Diplomat to Pakistan is said to have helped the members of the tiny Jewish community in the 1970s to migrate to Israel. She used to look after their needs for Kosher supplies including wine. She also took the records of the Synagogue with her and later gave those to a library in Jerusalem.

There were two famous Jewish cabaret artistes who performed at the Roma Shabana Nightclub in the 1970’s. They were Deborah and Suzie known as Daniel sisters.

In 2005, the front page of the Jerusalem Post featured a boxed item headlined ‘Surprise! There are still Jews in Pakistan.’ This story was triggered by an email sent to the newspaper’s online edition in a Reader’s Response section by one Ishaac Moosa Akhir who introduced himself thus: “I am a doctor at a local hospital in Karachi, Pakistan. My family background is Sephardic Jewish and I know approximately 10 Jewish families who have lived in Karachi for 200 years or so. Just last week was the Bar Mitzvah of my son Dawod Akhir.”

The construction of the Synagogue was an evidence of Karachi’s diversity and tolerance in those days, whereas, its destruction epitomized parochialism and intolerance prevalent now. Magain Shalome Synagogue was built in Ranchore Lines on Lawrence Road (now Nishter Road – at corner of Jamila Street) in 1893, by Solomon David Umerdekar and his wife Sheeoolabai. Further extension was undertaken nearly twenty years later by his sons Gershon Solomon Umerdekar and Rahamim Solomon Umerdekar. It was officially opened in 1912. The synagogue soon became the epicentre of activity for the small Jewish community. At a later stage a community hall named “Shegulbai Hall” was built by Abraham Reuben in memory of Shegulabai Solomon Umerdekar. In 1916-18 the Karachi Jewish community opened a Hebrew school on the synagogue premises and in 1918 constructed the Nathan Abraham Hall. At one time, the street was called ‘Synagogue Street’.

There is a road in Ramswamy neighborhood of Karachi, named after the founder of Magain Shalome, Solomon David Road (also called Suleman Dawood Road).

Solomon David was a surveyor for the Karachi Municipality. He died, at the age of 56 years, on 27th April 1903 and was buried in the Mewashah graveyard. The gravestone of Solomon David is said to read, “Very well-known and highly regarded Solomon David always wanted a liberal Jewish community, through his own expense built a fine synagogue, Magain Shalome.

The name Magain Shalome was given by an Indian Jewish Scholar, Samuel Ezekiel Talker who moved to Karachi and was instrumental in enlarging and rebuilding the synagogue. He served as ḥazzan and trained several assistants in order that “the eternal light should be kept burning continuously and eternally.” Talker was buried in Karachi.

The synagogue was often called by locals as ‘Bani Israel Masjid’. It was set on fire in 1948 (but survived) when several Jews were also attacked. It became dormant in the 1960’s. In July 1988 it was demolished by property developers, by orders of Zia ul Haq to make way for a commercial building to house a shopping mall – Madiha Square. An American Jew took the Torah scroll case to the United States. Whereas the synagogue registers covering the period 1961-1976 were donated to the Ben-Zvi Institute Library in Jerusalem. These ledgers documented several events, for example a circumcision recorded in 1963 and several weddings in 1963-4. However, in 1973 only 15 names were recorded on the ledger, of whom nine were listed to have “left Karachi”.

The Jewish community of Pakistan donated two silver Kiddush glasses from Magain Shalome Synagogue to the Museum of the International Synagogue at John F. Kennedy Airport.

The last custodian of the synagogue was Rachel Joseph who was an elderly frail retired school teacher (taught at Jufelhurst High School). She claimed that the property developers had promised her and her brother Ifraheem Joseph an apartment in the new building, and also space for a small synagogue. Unfortunately, both Ifraheem and Rachel Joseph passed away before they received any compensation. She felt that she was swindled and tried her best (unsuccessfully) to move a court to get what she was promised. However, she managed to muster some support to build public opinion and in 2003, Kunwar Khalid Yunus wrote a moving letter to daily Dawn pleading that she should be helped. Rachel Joseph, died on 17 July 2006 at the age of 90 years and buried in Karachi; her brother died about a decade before her.

Unfortunately, despite all the efforts the Magain Shalome Synagogue was ultimately burnt and brought down on 17th July 1988 to create a shopping plaza – Madiha Square. Property developers who built the plaza, promised space for another synagogue but that was never fulfilled. 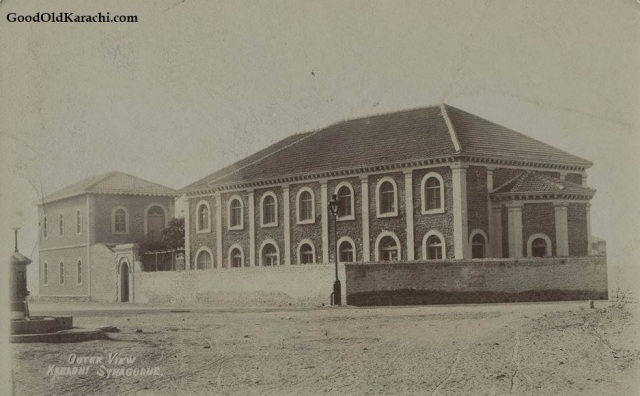 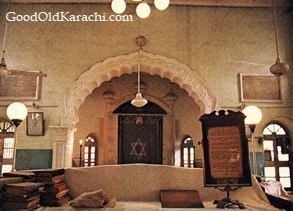 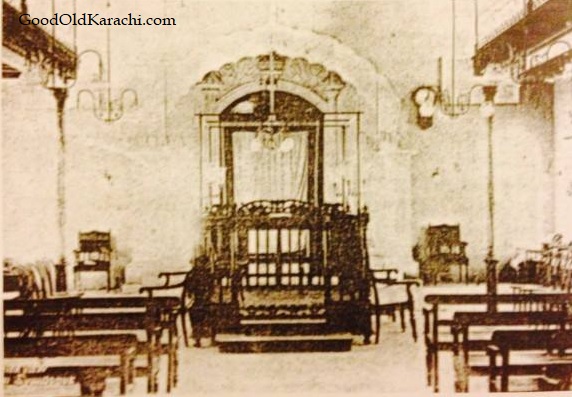 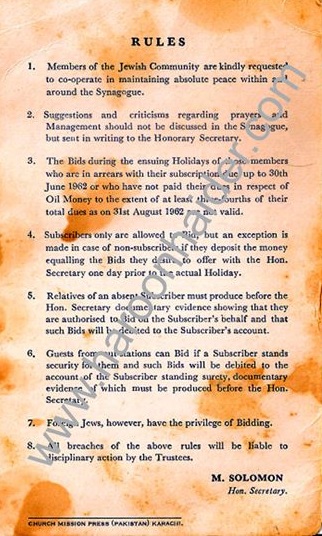 Graduate of Dow Medical College Class of 1977.
View all posts by Amin H. Karim MD →
This entry was posted in Contributions by Jewish Community. Bookmark the permalink.