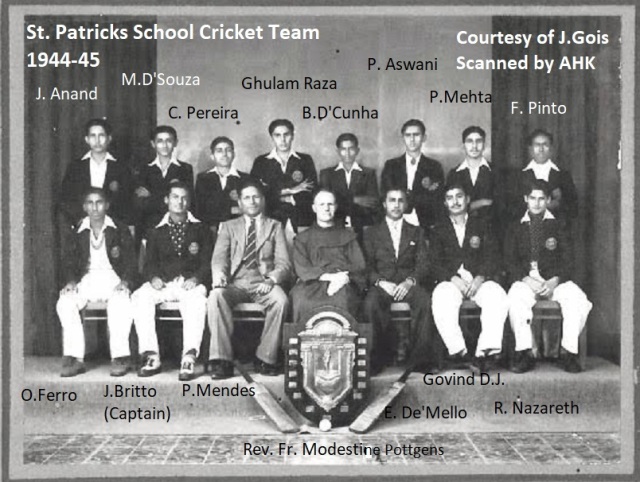 A PAGE FROM KARACHI HISTORY: St. Patrick’s High School, Saddar, Karachi Cricket Team in 1944-45 was Winner of the Rubie Shield for the Fifth Year in succession. This photo is courtesy of Patrician John “Pompie” Gois.  Goes to show a glimpse of diversity and culture in Karachi pre-partition and it’s eminence in education and sports

P. D”Cunha went on to play for the Kenya National Cricket Team. Jack Britto (Captain) was a super all-rounder. He played for the Pakistan Hocket Team in Helsinki Olympics 1952  (Information from Mr.Menin Rodrigues)

Edwin Figueiredo wrote: In the early days of Cricket in Karachi future Test Cricketers would practice and play matches in jahangir Park. Jack Britto is known to have struck the clock of Empress Market with a towering six. he was also a well known hockey player.

Graduate of Dow Medical College Class of 1977.
View all posts by Amin H. Karim MD →
This entry was posted in Contributions by Christians, Karachi Sports. Bookmark the permalink.