The Hotel World of Karachi of 1980s 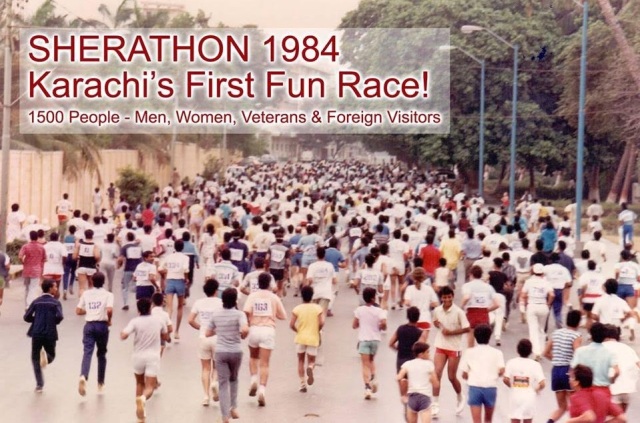 Keeping in view the economic gains envisaged for Pakistan as she nears the twenty-first
century, there is no doubt in my mind that the hotel industry here, if conditions favor, is
going to grow two-fold in the next decade or so.

Just recently, I bid goodbye to my hotels’ career and decided to divulge into a broader
spectrum of the marketing and communications sphere. For the last twelve years, I have
had the unique opportunity of working with the management teams of four of the best
known luxury hotel chains of Pakistan. There have been no regrets. Employment in the hotel industry is just as exciting and rewarding, in many respects better, than working for any other large organization. In hotels there are so many precious moments to cherish – as one gets the chance “to meet the world”.

I started my hotels career with the Holiday Inn Karachi in 1982, moving on to the Sheraton in 1984, then the Pearl-Continental Hotels and lastly with the Avari Renaissance chain until 1994. During these years, I was privileged to have introduced many “industry firsts” and had the rare distinction of meeting some of the most distinguished personalities of the world. Their pictures now adorn the walls of my new office.
Three Pakistani Presidents and four Prime Ministers, several world leaders from President Nicolai Ceaucescu of Romania to President Richard Jayawardine of Sri Lanka; from the Duke of Edinburgh to the debonair Dilip Kumar; or even personal chats with Prince Karim Aga Khan and Barber Conable, the President of the World Bank – all still linger fresh in my mind. Boxer Mohammad Ali playfully punched me in my nose and did magic with his red handkerchief when we asked the boxing legend to sign in the Visitors’ Book of the Sheraton; and England cricketer Ian Botham uttered his famous words “Pakistan is a place where one should send his mother-in-law to” when we mingled at the old Holiday Inn in Karachi. Life in a hotel is full of meetings! Hotel executives tend to sit down for meetings more often than they are required, but nevertheless, a lot is achieved in terms of solving operational problems. Every day, one dashes into an Early Bird meeting or the Morning Briefing as some call it – which lasts sometimes for an hour! Then there is the Heads of Departments meeting or the Executive Committee meeting. The Controllers pin down all and sundry for their Credit Meeting, and the food &amp; Beverage Director assembles his team to discuss, of all things, broken crockery and dirty linen!

While the Front Office Manager meets with his people to talk about reservations and
courtesies, the Executive Housekeeper is always complaining of being short-staffed. On the other hand the Laundry Manager thinks he washes the dirty linen of the entire metropolis and the Chief Security Officer runs his own army and surveillance men! How can I forget the Purchase Managers of the hotel world, “It’s not available in the market but I’ll get one for you!” I have recounted the above satirically with due apologies to my former colleagues, who, without any doubt, were thorough professionals in their area of work. Let me now recall some of the pioneering milestones of my career:
In 1981, the Holiday Inn Karachi became the newest hot spot in town, after the grand ol’
lady, Inter-Con, had turned grey and feeble. Sadru Hashwani’s Holiday Inn gave Karachiites a new taste of glamour and its favorite coffee shop, Nadia and bustling lobby. Between the two it was a winning concept of “to see and to be seen”.
We opened the doors to Juliana’s discotheque and Suzie Wong became a buzzword. Chef
Kenneth Chu was at the pinnacle of his career. We jam-packed the city’s first pillar-less
Crystal Ballroom with the sleaziest of couples on New Year nights, and with the versatile
Mehmood Masood, organized glittering year-end parties for corporate clients. We met with Judy Geeson of “To Sir with Love” fame and spoke about the Oscar-winning performances of Sidney Poiter, Spencer Tracy and Katherine Hepburn. In 1983 when the new-year’s night party in Juliana’s and the lobby of the hotel was ransacked by an angry mob, I was hosting 700 merrymakers in the ballroom! That night, Pakistan changed forever!!

In 1984 I moved to the Karachi Sheraton Hotel for a considerable period of time and
achieved some of the greatest moments of my career. In the mid-80s I produced the
industry’s first-ever in-house glossy magazine “Sejour” and came up with many award-
winning ideas. “Shera-thon” the fun-race is probably the first of such events held in
Pakistan; later several “Runs and Walks” became common social events in Karachi, Lahore and Islamabad.
The Sheraton anniversary programs were introduced and it became a tradition. We opened the first “Art Gallery” and displayed “Pakistan’s first solar car” in the hotel lobby. We gave the under-privileged children of Karachi their first “Gift of Love” – a heart shaped cake weighing 20 kilos and flew the Sheraton banner across the skies of Karachi in a branded Cessna plane!
I’ve also had the privilege of introducing the first opera performance and café theatre
production in Karachi, bringing in Joann Grillo, Richard Knees &amp; company from the New York Metropolitan House and Derek Woodward of the UK and Dubai. I remember Joann talking to me in the lobby of the Sheraton about her singing in a personal audience with Indian PM Indira Gandhi in New Delhi in 1984.
When the cricketing nations of the world descended upon Karachi hotels in 1987 for the
“ICC Cricket World Cup” I wrote grapevine column on cricketers when they were off the
fields, so much to write about!
We worked with Hameed Haroon, Imran Aslam, Kaleem Omer, Fifi Haroon and Rimmel and produced “Yesterday once More” it was an epic event to remember. The 2-day spectacular was about events and lifestyles that shaped Pakistan from 1947 to 1987! Yes, also a live (model-based) demonstration of F-86 Sabre dogfights during the 1965 war!
We made squash legend Jahangir Khan a global “Citizen of Sheraton” and carved a
margarine statue of cricketer Vivian Richards in the lobby. The world’s tallest man Alam
Channa (7 feet 4 inches) stood by Night Manager Akber Munir who was 4 Feet 11 inches
then (not really) and Imran Khan sported the Sheraton “S” in a One Day series against the West Indies – for a glass of orange juice as his fee!
All these wonderful years at the Sheraton didn’t go without recognition. I won the world
wide hotel industry’s most prestigious ITT Creative Award in 1987 and went to San Diego
to receive it from Randolf (Randy) Araskog, the ITT boss and one of the world’s highest
paid executives! It was a magical moment of my hotelier career.
Finally, I got married at the Sheraton in 1989, cut a 10-tier cake (reported in the Glamour
magazine as “the tallest cake in Pakistan”) and let 1000 white balloons trickle on us
while we danced the night away.
Moving on to the Pearl-Continental Hotels, I gave them “Bonjour” the in-house magazine
and which went to remain as its corporate magazine. With general manager Wasim Mirza we built a great team and managed a legendary hotel – like a phoenix it was raised from the crummy old Inter-Con to a plush and special hotel. Pearls all over Pakistan had created a brand-new version of a deluxe Pakistani hotel chain. We also opened the country’s first 5- star resort hotel in the Murree hills, the PC-Bhurban. Adnan Sami Khan was a spoilt brat fiddling with his Yamaha keyboard in our offices when Wasim and I worked together with his late father to bring Ustad Zakir Hussain from India to perform ‘Live’ in Pakistan at the Hashoo auditorium. The maestro was mobbed by a screeching audience.

I was with the Pearl–Continentals for just about 12 months, each month as exciting and
challenging as the other. Professionally, it turned out to be a stepping stone for me to win
the acknowledgement of the Avari Management who hired me as their Director of
Marketing for their hotel chain. I joined Avari Hotels Limited in 1990 and for me the experience was like a family affair. The Avaris are passionate hoteliers and respect their employees under any circumstances. I enjoyed working with them and learnt a great deal in fair play. To the Avari Hotels, I gave them their first in-house magazine too, their first Quality Assurance program and the first Private Line Club. But the crowning glory at Avari was winning the contract to do the arrangements for the opening ceremony of the new Jinnah Terminal on August 26, 1992 with the Prime Minister of Pakistan as the chief guest and an audience of 2000 VIP guests.

Hoteliers do enjoy life – good food, excellent ambiance and surroundings, great working
conditions, good facilities, a sure feeling of camaraderie and a rewarding future to the right candidates. You are actually in a world of your own!

Graduate of Dow Medical College Class of 1977.
View all posts by Amin H. Karim MD →
This entry was posted in Entertainment in Old Karachi, Karachi Recalled. Bookmark the permalink.

1 Response to The Hotel World of Karachi of 1980s