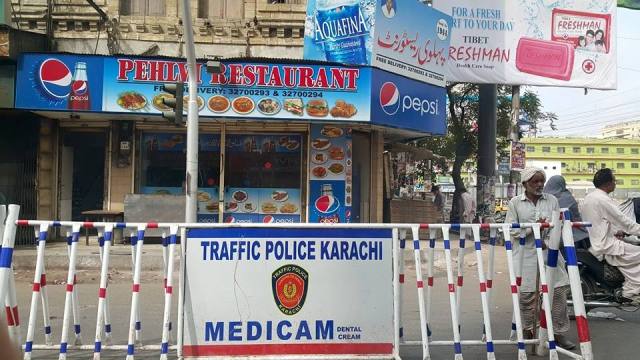 Located at what we yearn and strive for—-the corner plot neighbouring Lyric Cinema on M.A.Jinnah Road Karachi….this restaurant was established in 1955-56.

It was the most visited place and at one time the pak based staff at the American Embassy in Kandawalla Building adjacent to Nishat Cinema regularly had their lunch there.

My first visit to this restaurant was in 1960 with with Garden Road Colony friend Hafeez on eid day when we were to watch “Golaith and the Barbarians” at Lyric. It was walking distance from ours.

After the matinee show..we decided to have some snacks at PEHALVI where we found the service excellent and food awesome…like spicy and tasty…which compelled us to plan the Sunday lunch with more friends at PEHALVI and on that particular..quiet and serene and gulabi Sunday of December 1960 we had the lunch I can never ever forget at PEHALVI ….
We had : Brain Masala, Egg Channa and Daal Maash…with Irani Naans. It is a Persian Restaurant…then owned by an Iranian settler who..we heard… had some partnership in Lucky Irani Circus as well.

Well remembered at PEHALVI is the courtesy and the budget also. We four from Garden Colony had chipped in on equal basis. The total bill was Rs.52/-.

I salute PEHALVI restaurant for keeping up its journey and I am sure they are doing good on the food that they survive witnessing so many happenings at that most popular and now highly infested traffic spot right in the centre point of sangam of M. A. Jinnah Road and Garden Road….which converts to Abdullah Haroon Road coming from Bambino towards Saddar.
Amazing strikes and jalaow gheraow was the bench mark of that area where…a little ahead of PEHALVI’S left side towards Radio Pakistan was the ever famous POLAD & POLAD bypassing the fondly remembered ZELIN’S corner and the biggest locker branch of HBL. ….not to forget that famous disco “The Hut” above ZELIN’S of Fazalbhouy family.

All these are gone with the winds of change but accolades and kudos to PEHALVI to survive.

Now I am lured to visit the restaurant (after 1960) and try out their dhabba like food…whether it be a risk or refresher of that unforgettable taste of Dec 1960….55 years ago.

The story has it that when Shah Of Iran visited Karachi he was taken in a buggy from Quaid’s Mazar to President House (now Gov House) and at the entrance taking the turn towards the road leading to Elphinstone Street (now Zebunnisa Street.) the buggy cade of Shah with Ayub Khan seated next to him…was stopped for a minute that Raza Shah noted the signboard of PEHALVI restaurant and waved towards the restaurant…..

Graduate of Dow Medical College Class of 1977.
View all posts by Amin H. Karim MD →
This entry was posted in Eateries of Karachi. Bookmark the permalink.