KARACHI-ite–>Waheed Murad – A Legend Hero:
By 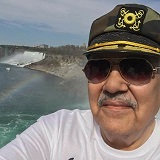 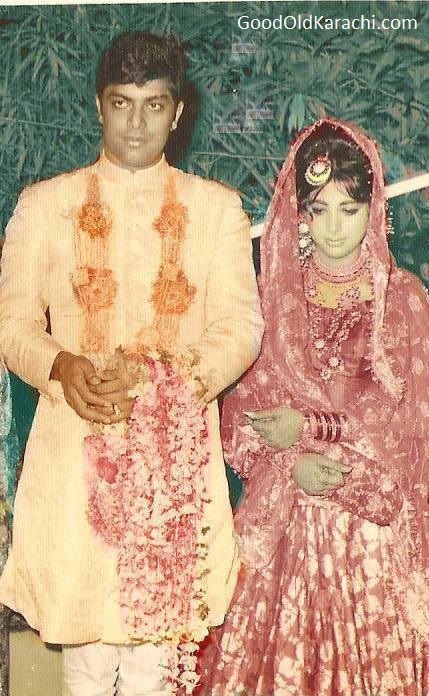 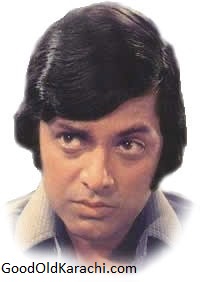 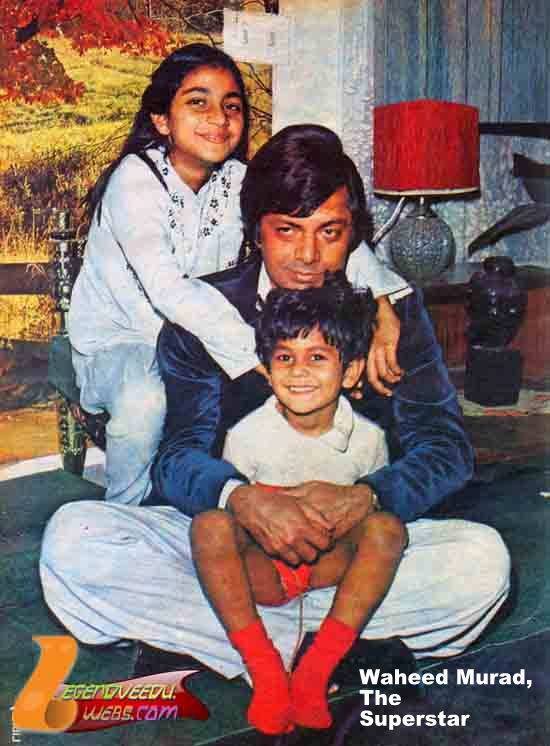 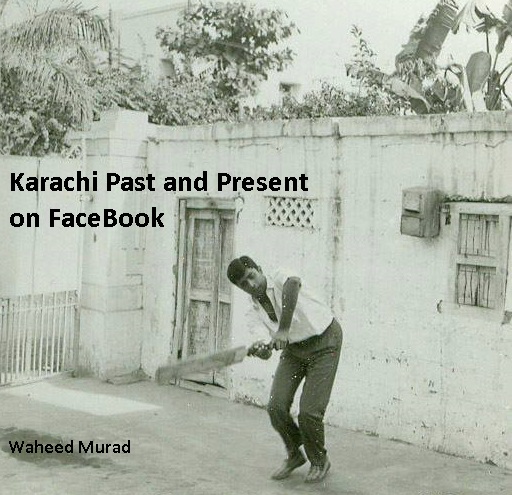 Waheed Murad was the most popular and stylish romantic hero in Pakistan. His nicknames were “chocolate hero” and “romance ka shehzada”
He was a handsome person also the most well dressed hero of its times
He was a craze among his fans. He was the first actor in Pakistan whose fan clubs were made and still 25 years after his death, his fans celebrate a week by running his 7 movies on cinemas every year, also his hair style was adopted by people
He was Pakistan’s most favourite hero among girls. In his hey-days once he went to Sadar area of Karachi in his white car, realizing it is Waheed Murad’s car, a group of 30 college girls covered the vehicle with lipstick kisses
He is compared with Hollywood actor Elvis Presley due to some similarities between them. Both enjoyed early success, the status of being the most mesmerising personalities of their own countries, great fame and then sudden fall and tragic death
He is the first rock‘n’roll dancing hero in Pakistan and he gave new style of pasteurizing songs
He is the first Pakistani hero whose official website was launched in 2002.

Film career:
He appeared in a guest role in film Saathi (1959), then he started his carrier as a film producer with Insaan Badalta Hay (1961) through his father’s production house Film Arts
As an actor he was casted in film Aulad (1962) in a supporting role, where he was the son of Habib and Nayyar Sultana which was followed by DAMAN (1963) where he paired with Neelo.
He got breakthrough from Heera aur Pathar (1964), which was the first movie by top director Pervez Malik with Zeba as his heroine.
His film Armaan (1966) was first ever platinum jubilee Urdu film in Pakistan. With the success of this film Waheed Murad became the top most star in Pakistan film industry and ruled next 10 years. The team of Waheed Murad, director Pervez Malik, Musician Sohail Rana, Singer Ahmad Rushdi and Lyricist Masroor Anwar was very popular in late 60s and they produced some successful films, later they were separated. His other platinum jubilee urdu films were Anjuman and Aawaz, while Shabana was his only diamond jubilee film.
Waheed Murad played villain role in Sheeshay ka Ghar.
His first Punjabi film Mastana Mahi was super hit, his other Punjabi film Ishq Mera Naa (1974) celebrated platinum jublilee. He worked in 9 Punjabi and 1 Pashto film.
His last released film in his life was Maang Meri Bhar Do (1983).
Hero and Zalzala were released after his death
He really wept while shooting of a touching scene in film Maa Beta
His favourite movies were Armaan, Insaniyat, Anjuman and Andaleeb. Armaan had such a tremendous impact on him, he named his house in Lahore Qasr-e-Armaan
His film Rishta Hay Pyar Ka(1967) was the first film of Pakistan which was shot abroad (In England)
Film Naag muni (1972) was the first film in Pakistan, where hero and heroine played double roles, hero was Waheed Murad and heroine was Rani
He was hero in Chand Sooraj (1970), the first Pakistani film which was based on two different stories.
He invited Shabnam to then west Pakistan and cast her in film Samundar (1968)
Top Pashto film hero Badar Munir was his driver before films, Waheed Murad introduced him in film Jehan Tum Wahan Ham (1968)
He became the first personality in Pakistani films who was hero, director, producer, script writer and singer in the same film, which was Ishara (1969)

Private life:
Waheed Murad was born into a wealthy family in Karachi on October 2, 1938. He was called as Veedu at home. His father Nisar Murad was a film distributor in Karachi. His mother’s name was Shireen Murad. He was the only child of his parents.
He passed matric from Mary Colaco School, Karachi. He did B.A. in arts from S.M. college, then he did Masters in English literature from Karachi University.
His house was at Tariq Road, Karachi.
His height was 5’ 11”.
He fell in love with Salma when he was in 9th class, finally they married on Thursday September 17, 1964. His wife was the daughter of an industrialist, who was the owner of H. M Silk Mills.
His one daughter died in infancy, He had other two children Aalia and Adil Murad, who also worked in films.
He suffered a serious accident at Ravi Road, Lahore in November 1983 but survived.
He died by heart attack in Karachi on Wednesday, November 23, 1983 at the age of 45. His father died in 1982, he died in 1983 and his mother died in 1984. He was buried in Gulberg graveyard, Lahore.
His wife Salma Murad could not see him after his death, when he died she was in USA, Salma’s sister phoned her, she couldn’t get flight but somehow reached London and then traveled to Karachi, when she reached here they had taken his body to Lahore, when she came Lahore he was buried.

ONE OF THE FIRSTS SUPERHIT OF WAHEED
“HEERA AUR PATTHAR (1964)”

HEERA AUR PATTHAR under FilmArts of Waheed Murad’s Dad Nisar Murad…was perhaps the 3rd of their production..which had the newly debuted WAHEED MURAD (having done a side role as Sabiha’s son in ‘AULAD’-1961).Directed by Pervez Malik, HAP became the first ever golden jubilee (B&W) movie of Pakistan..which was wholly made i…n Karachi at Saeed A. Haroon’s Eastern Studios and about 65% on location at some guava farms of Malir and nearby Goths..a few odd miles from Karachi Airport.Starring; Waheed Murad, Zeba, Kamal irani, Ibrahim Nafis, Adeeb, Nimmo her sister Kammo, Nirala, Naz Begum, Agha Jan and some famous regular visitors of Eastern Studios like; Feroze (who wanted to make ASSALAM ALAIKUM which had the famous Salim Shahzad song; Muhabbat Ke Deeay Jala Lo) and two faces I can never forget–seen in many Waheed movies of Karachi–doing something or the other in tidbit roles as badmash aur a friend or someone. I think one’s name was ANSARI ?HAP covered just about all of Karachi’s serene and quiet areas of those days. From the songs you are to see by clicking the links below, you’ll see the famous musical fountain of Karachi which use to show off beautifully with water sprinkling and music played in front of the then REX cinema near Trinity church…jo ke subb gharatt hogaya Karachi seYou can also see the M. A. Jinnah road coming from Jinnah’s mazaar…when it was under construction. Also the National Stadium Karachi where one could just walk-in….(now it’s like you are a thief to even roam around that area ) Waheed did some shooting at his in-law’s ‘H.M.SILK MILLS’ at SITE area, Karachi..also which involved him, Nirala, Ibrahim Nafis and Adeeb. I remember ALL this by heart and its the first ever time I scribe all this…before my memory gives up the huge data it has stored on GB basis.The LYARI people had declared HAP as their NATIONAL movie on account of Waheed and his movie-Dad Kamal Irani being donkey cart drivers in that movie and the fantastic donkey cart race Pervez Malik beautifully picturized at Nazar Mohammad Goth-Konkar near Malir farms.The swinging ROCK song ‘Diwane Ho Ke..Mastane Ho Ke..Aao Manayen Picnic…’ was shot at KARACHI AIRPORT CLUB which still exsists but in horrendous condition now. It is located just adjacent to my UBL’s Airport Main branch at Old-Old Airport.. now VVIP Airport…when you go through Star-Gate.AIRPORT CLUB had one of the finest New year parties. My cousin Chicco Jehangir..I distinctly remember, danced JIVE there on LIPSTICK ON YOUR COLLAR….once. I was there as we use to regularly visit that club. It has a beautiful ambiance. A huge swimming pool (now filled with sand and rocks ) and a Squash Court. You’ll see in one of the links below….the swimming pool and all…when Adeeb is seen spending his rich dad’s money on his friends…and having fun…!I saw HEERA AUR PATTHAR…at least 12 times (once a late night show with Ibrahim Nafis and Talat Hussain also..they both were Radio Artiste) at NAZ Cinema, Karachi opp: Nishat Cinema.

First, a bit of trivia for you;
———————————-
His heroine in many movies, Shabnam, could pronounce his name only as “Auheed Moorad”…..that I am a witness…..also of the shoot of that famous song “Kuch Loag Rooth Kar Bhi, Lagtay Hein Kitney Piyare” in Gulberg near Auheed’s house where he drove his friend’s convertible.. a red Triumph right hand drive two door sports. That roadrunner street is now named after Auheed Moorad in Gulberg near Liberty Market, Lahore……

I was highly inspired by Waheed. I adopted his hairstyle and some action in acting. I met him several times on shoots in Karachi, Lahore and Murree…,including Koko Korina in Eastern Studios, Karachi…and one song shoot in Murree at Cecil Hotel.

Graduate of Dow Medical College Class of 1977.
View all posts by Amin H. Karim MD →
This entry was posted in Entertainment in Old Karachi. Bookmark the permalink.