The Karachi I Used to Know

The Karachi I used to know
Posted by Muhammad Haseeb 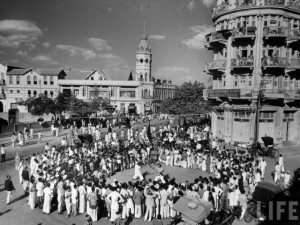 The hustle and bustle of trams in early 1970s.

Yesterday afternoon, I sat and watched with horror the events on TV, sans mobile phone and only some connectivity via email. Needless to say, it was frustrating, as the main focus of the anarchy was the area around my place of work.

How could humans descend to this level in a metropolis where commerce and 20 million lives function together in a place they call home?
Is this what humans do to their lives, friends, neighbours, communities and fellow citizens?
Having spent two thirds of my life in this city, I know in my heart that I belong here.

But this is not the Karachi I used to know.

I am solely motivated to write this article due to the Facebook group “I sure want my old Karachi back”. The nostalgia felt by the members has made me recall some of those expressed, vibrant memories.

This is my own diary and is not a catch all. It spans the period of mid 60s to mid 70s. My existence revolved around Karachi Grammar School, the hawkers, the eateries, some cinemas and a few sporting memories.

Beginning with the area of Saddar, school was a place of bliss, mainly because of friendships rather than studies. It revolved around a break, when we consumed Coke and patties, the taste of which has never been replicated. Home time was when the hawkers collected outside the school. There was the tek wala, who sold this sweet, gooey sugary stuff made into shapes like birds and musical instruments. Great taste! Sometimes there would be a jungle jalebi guy, and at other times there would be the mouthwatering gol gappas!

If we could not be picked up from school due to transport issues, we would walk down to Empress Market and Trampatta Road. Ah, those jingling warnings of approaching trams, lost forever in the folds of time. Lined up on those hustling streets were the wonderful gannay ka ras (sugarcane juice) and lassi vendors for people to quench their thirst in the blazing summer. Even the prices were amazing; a 50 paisa coin would suffice all.

Annually till March, athletic games were held at Webb Field (now Macro). My neighbours and I would traverse through the old Lines Area to get to the ground. We used to live in PECHS, so we had quite some miles to walk. This routine included a stop at the faluda cart. No faludahas ever tasted like the one that cart had to offer. The tukh malanga in the faluda was great to keep us cool throughout the afternoon practice. On the way back, one would sometimes stop by the a bakery called Sandooq  for low price cakes and pastries galore!

In those days, Karachi came to life at night with a lot of activity on offer. You would see people at parks like Polo Ground, Frere Hall and Hill Park. Clifton, on the other hand, was quite different; high tide used to reach upto the Kothari Parade.

Memory has faded, yet I can recall the cry of “chana choor garam”…a spicy, dry concoction. Sometimes one would go to Playland and have a few games of pinball. The Makranis used to play Foosball and were masters of it.

People would dine out at various places, but posh restaurants were only few. A crowded Bundu Khan remains distinct in my memory. The Chinese ABC restaurant is not like anything I have ever eaten again. James Lee, the son of the restaurant owner was in my class, so maybe I am biased. Vague memories of Burns Road (better known as ‘Banns’ Road), with its dhaga kabab, sheer maal and nihari, surround me, though I was never sure where we would eat, at  Waheed or Saabri.

I vividly remember Hotel Farooq and its succulent chicken tikka. In the later years, Tariq Road surfaced (called the Commercial Area in those days) and restaurants such as Café de Khan, Tung Nan and Silver Spoon for their Kebab rolls became the talk of the town. At that time, some great Bengali stuff was also available at Mishti Mukh. On my first visit there, I ateshaundesh.

As we grew older and were able to drive, we would sneak out of school a few times, depending on our negotiation with the security guards. I clearly remember two highlights of these trips. Firstly, daal kee puri, pretty common nowadays, was available at Commissioner Office, across from Trinity Church. Then there was chullu kee chaat, at Soldier Bazaar. This particular guy would continue cooking the chaat until it became almost like mush. One bowl was a meal in itself.  Occasionally, we would visit Shezan or Café George at Saddar, however, these visits mostly took place in the morning, nevertheless the tea and cake piece were out of this world, especially if you are bunking math.

Pride Of Place was our hangout spot during Sunday afternoons, when sometimes one would either get a jalebi, samosa or dahi phulki from Fresco, near Pakistan chowk.

In terms of cinemas, we preferred Bambino, but in later years Capri became more trendy. There were others like Rex on Victoria Road and Palace at Metropole. I remember watchingBlue Max post exams in grade eight and My Fair Lady in 1970 late at night at Palace. In addition, I vaguely remember watching Hatari at Palace in 1964. Soon came the phenomenon of the Drive-In Cinema. I don’t remember any of the movies that were screened, but it used to be exciting to go there. It was located on the Dalmiya Cement Road. I also recall watching this crazy movie called Walking Tall, late at night at Capri with friends. Going to a movie was always exciting and is totally unlike our download culture now.

Karachi: the fast-paced city of lights.

Lastly, sports. Besides the school stuff there was a lot going on at the National Stadium. Test matches were few and far between, but first class used to abound. Remember Hanif scoring 190 in a match in 1970 after he had retired from tests. The entry was free and approximately 500 people used to come there to watch te game. When it came to Test matches it was difficult. Tickets were not easy and the facilities stretched. I remember the time when Mushtaq got run out for 99 – there were three 99s in that match – vs England in 1973. Also, there was this sad match when Hanif retired in 1969.

The culture of Pakistan then was free and one could move around without fear. No go areas were non-existent; people laughed and enjoyed themselves, besides getting on with the serious business of earning a living. There were nightclubs and discos (I was too young to go to these!) and those who went were allowed to – no one threatened anyone else’s existence.

This was a city in harmony and at one with its inhabitants. We as a city were not rich, but we lived together and were a larger community. I prays that those days come back to us again and our new generation can live like we used to ─ happier and united!

Graduate of Dow Medical College Class of 1977.
View all posts by Amin H. Karim MD →
This entry was posted in Karachi Recalled. Bookmark the permalink.

1 Response to The Karachi I Used to Know