Neighborhood Around Dow Medical College, Karachi in the 1960’s. 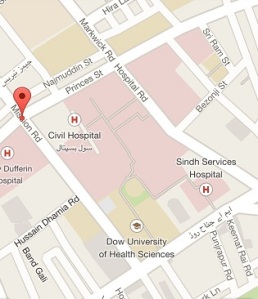 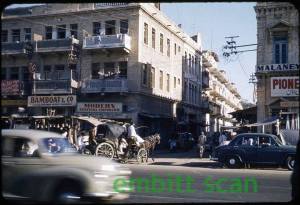 DUHS and the adjoining Civil Hospital Karachi sit on a large city block bounded by
M.A. Jinnah Road (formerly Bunder Road) on the east, Hospital Road on the North, Princess Street to the West and Mission Road to the South.  Mission road continues eastward as Arambagh Road leading to Pakistan Chowk and another neighborhood of teaching institutions like D.J. Science College, S.M. Law College, Formerly N.E.D. Engineering College.
Right across from DMC in the 60’s and 70’s was a famous shop called Bamboat and Company which sold material and paints for artists. It had another branch in Saddar. Both are closed now. It was owned by a Bohra family  One can see Morris cars in the photo which is the corner of Mission Road and M.A. Jinnah Road.
Also located across from DUHS on Mission Road were International Book Store and Azamsons which supplied medical books and stationery to students.
November 19 2013. 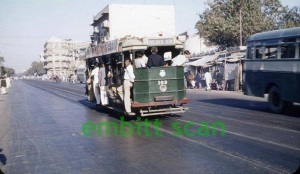 Trams served Karachi upto 1960’s when the tracks were pulled off Bunder Road. They ran from Saddar in different directions all the way to Keamari, Cantt Railway Station, Soldier Bazaar and Keamari. The tram in the picture is on its way to Saddar. The rounded building in the distance is where Robson Road joins Bunder Road.  In that vicinity were 2 cinema houses:  Majestic Cinema on the  corner of Bunder Road and Hospital Road and Ritz Cinema across from it. Magestic showed Western movies while Ritz was more for desi movies. (I saw Tom Thumb and Jack the Giant Killer at Magestic in the 60’s)  Both are now shopping centers.  Dowites living in hostels were frequent visitors to these theaters. In the neighborhood of Ritz Cinema was a elementary school run by a Jewish lady who in the early 1960’s migrated to Israel. ( I attended the school as a kid). The site of the school later became a Auction House.

A closer view of the Bunder Road-Robson Road corner. The building on the left with the minaret is Majestic Cinema on the corner of Hospital Road leading to Civil Hospital Casualty Department. 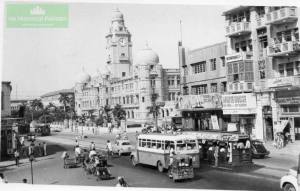 Moving southwards from DMC one came across this famous landmark in Karachi the Karachi Municipal Corporation, keeper of the City. On the right of it is the Lighthouse Cinema showing Pakistani movies. Alongside Lighthouse Cinema was the famous Landa Bazaar selling used clothes. Across from Lighthouse Cinema were two famous restaurants the Dehli Muslim Hotel and the Dehli Muslim Kaali Hotel each competing with the other in who could make the best keema. Dow students frequented these often.  Also in the area two well known businesses: Jinnah Sports for sporting goods and Taj Quran Company, the largest printer of Quran Al-Kareem in the country. (still there to this day).

Graduate of Dow Medical College Class of 1977.
View all posts by Amin H. Karim MD →
This entry was posted in Karachi Neighborhoods. Bookmark the permalink.